Introduction
Over the past 4 years I have been thinking of a way to redefine the way I work with field recordings and built an instrument that helps me do this. I would like to share with you the current system I am using to create compositions.

I define a field recordist as a person who seeks to experience a deeper understanding with the world though sound that often leads to an adventure, no matter how big or small. The goal is the document of this adventure and not any compositional goal.

I would also like to add that my approach to this topic and the instrument design was from my background as an audio engineer, field recordist, and architect, not as a musician, so this article will be biased in this way.

Begin
Using field recordings as a medium for composition is difficult. Typically, they are selected for their musical properties or transformed into musical elements such as ambience, noise, rhythm, and tone- purposes imposed on them to fit the needs of a 'song'.

In contrast, the field recordist does not consider the recordings as an additive, and the integrity of the recording should be kept throughout the composition process.

Goal
The goal for this project is to create a method of composition that maintains the improvisational concepts of field recording from its documentation to its execution. 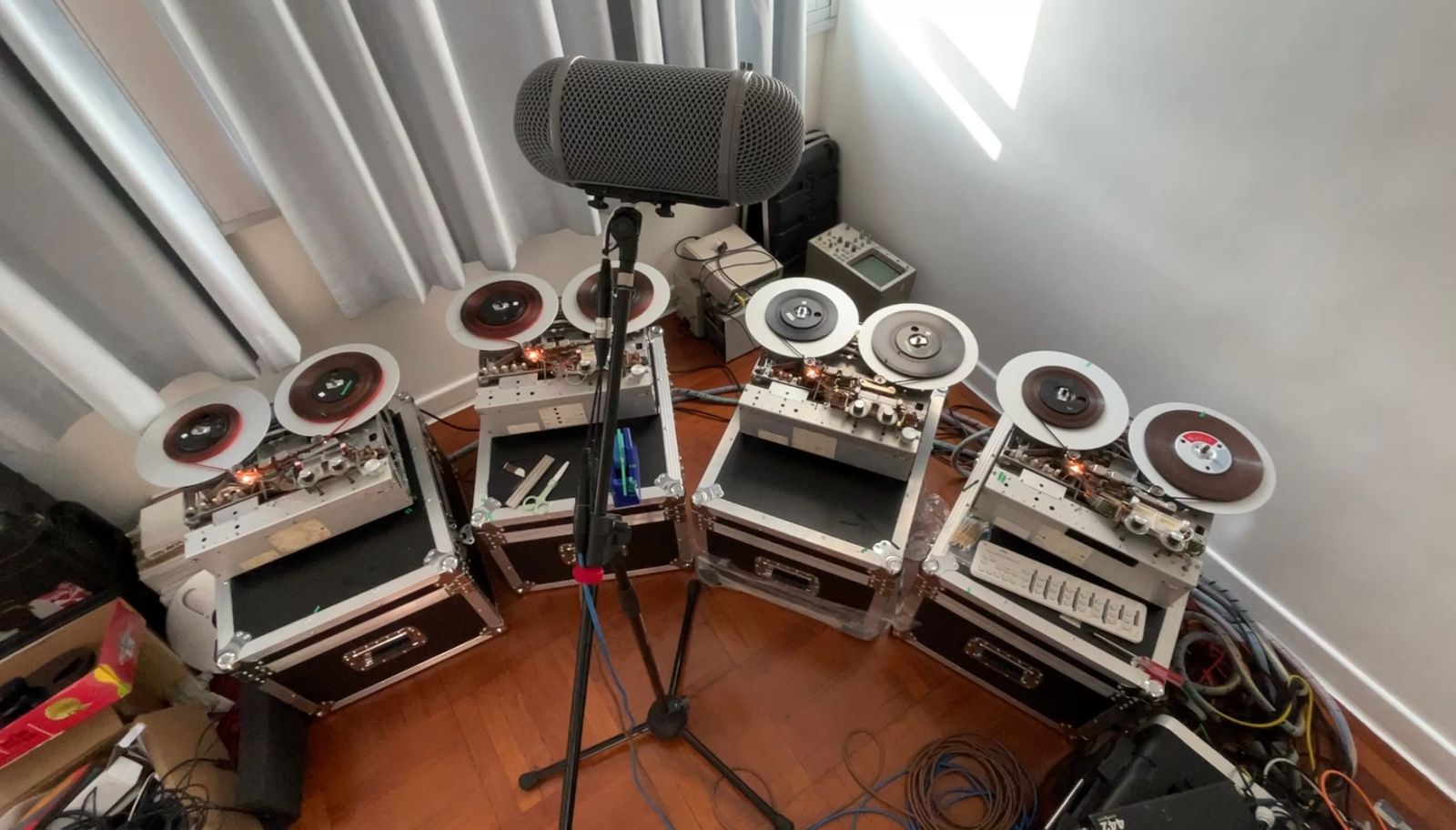 The instrument
The instrument is where the composition is born. It contains physical (hardware) and user-programmed systems (software) that contain it, give it life, and allow it to evolve over time.

The instrument is made of equipment that consumers can obtain. It is made up of: 2-4 tape machines with remote control function, digital mixer, digital sequencer or DAW, MIDI patchbay and a MIDI conversion box (optional). The components can be user defined as needed to make it work.

The concept of ‘documentation’ is also applicable to the hardware and the preservation of their current state of decay. Any tuning or calibration is not necessary unless the machine is unable to run or the audio is totally unusable. This allows for any accidents to happen and also reveals the unique character of each machine. Regular head cleaning and maintenance is required to keep the machine running.

I also record on used magnetic reel tape that also allows for serendipitous moments such as drop outs caused by shedding or age. This adds a lot of character to the result as different kinds of tape can be combined together or taped over for different textures.

The sequencing System is made up of Songs and Chunks:
Songs are made up of Chunks put in a sequence.
Chunks are the building blocks which control the machines.

The Chunks are the tape machine’s basic functions (play, stop, record, fast forward, rewind) within a length of time.

The unit of time is based on a human breath (B) and ranges from 0.5B to 6B. As a reference, 1B is equal to around 3 seconds. I used ‘breath’ units to humanize the actions during sequencer playback of the Songs. FF and REW are only 0.5 and 1B.

In my DAW, I have a feature that allows you to save sequences in a list for future use. 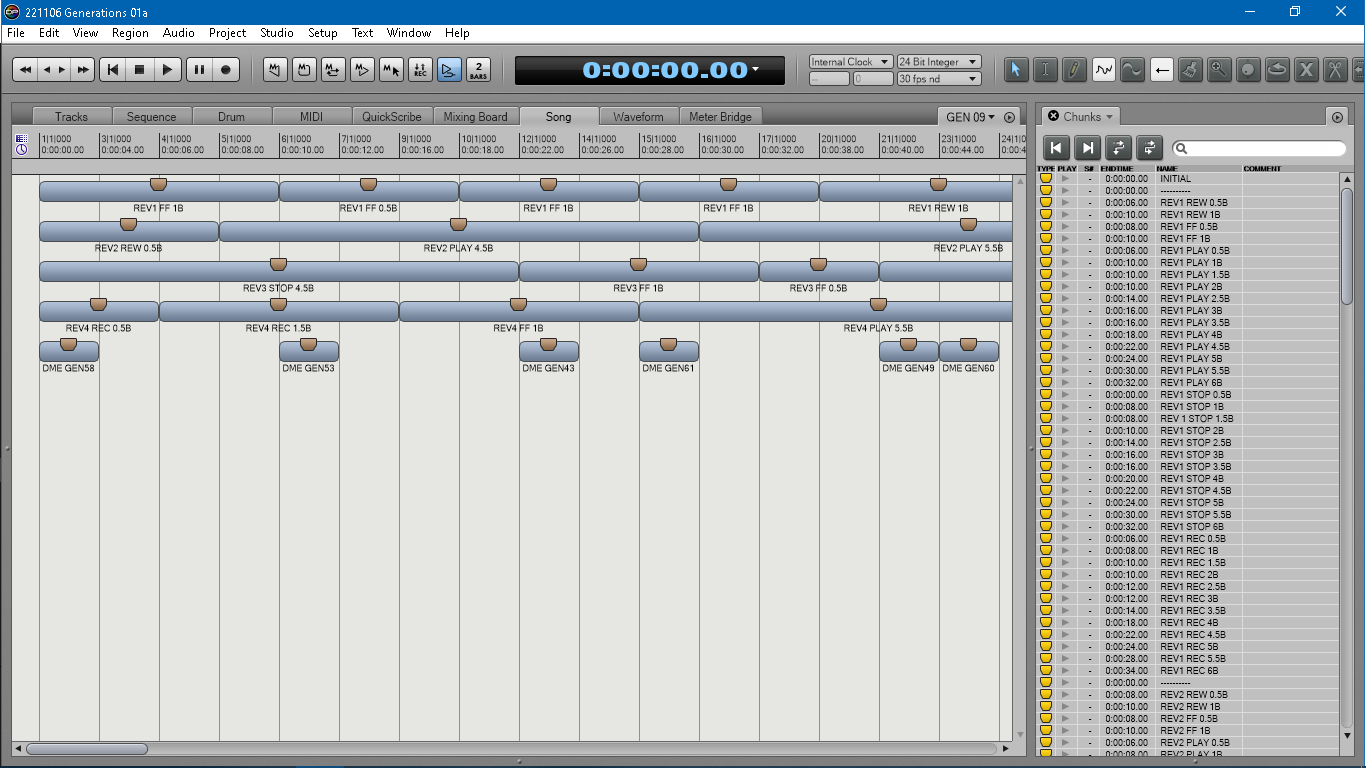 Here you can see on the right is the Chunk list. These will be dragged to the left to make a Song.

There a total of 64 Chunk files.

The Song
The Song design was the final piece of the puzzle and had to be in keeping with the idea of the improvisational concept of field recording. The difficulty I found early on was that I was approaching this instrument the way I would play a typical musical instrument, where one knows the sound they want and makes an action to achieve it: "I want a C so I will press this". However, this method cannot apply when the result is an amorphous sound such as a field recording. So this composition approach cannot not be based on sound before action- it had to be based on action before sound.

Thus, only a sequence of actions are needed to create this composition. Which is exactly what we can create with the Functions we just made.

As with any program, one tries to find the most efficient way to run it. Many hours may be spent to refine a process that makes things easier and more productive. I wanted to spend more time recording sound for each ‘Generation’ and less time making decisions to compose it.

Randomness vs Chaos
In my early experiments I was unsatisfied with my own ‘random’ compositions because the actions had no justification, or reason for existing, which the architect side of me really disagreed with. I was also too involved with the piece and this was discouraging me and creating indecision which hampered progress. I needed to let it grow on its own with none of my help.

Taking inspiration by the Aleatoric composers of the 60s who made compositions using chance: Cage, Stockhausen, Cowell, etc., I used a random number generator (RNG) to pick numbers to make my decisions. Much like using the Yi Ching, you present a question and chance gives you an answer. This method proved very efficient and logical and more importantly, it justified all the events happening within the composition. All actions were dependent on the length of the composition which was also decided by chance.

The Program parameters are found and refined through experimentation and personal preference. These are predetermined before the composition begins.

The following are the parameters in the instrument that are decided by chance: 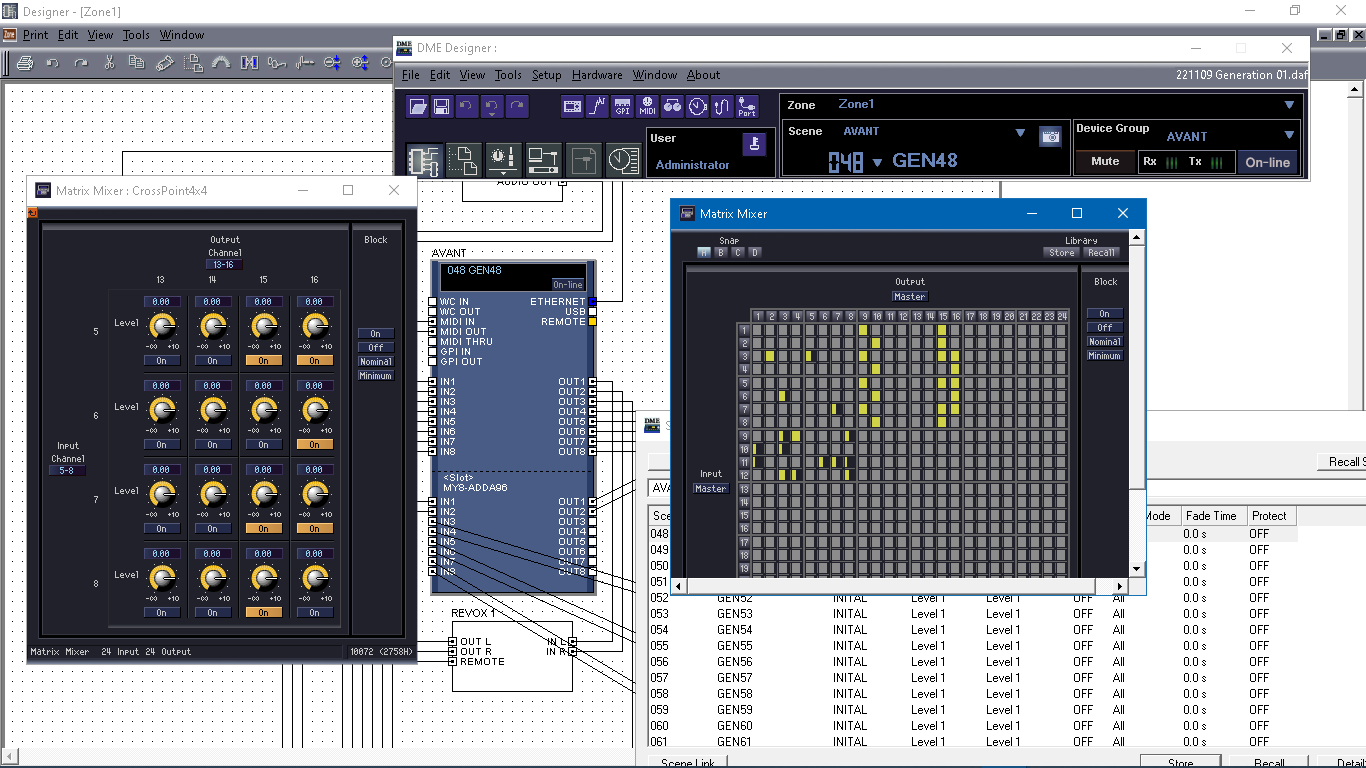 Proprietary editor software for the digital mixer
I use chance operations to create routing ‘Scenes’ to/from each of the recorders and players so that they can record and rerecord themselves over multiple units. Be careful for feedback loops.

Recorders
Which track to arm is determined by chance operation. Ch1, Ch2, Both.

A more detailed description of my programming process will be posted at a later date.

The Recording
I start two digital players that play the original recordings then I play the Programs to propagate the blank reels with sound. Though not necessary, I record each pass to know how the audio is doing and that the levels are decent. I would put some of the interesting ones back on the players at a later time to be reintroduced, creating multiple layers. This can be repeated to create even more layering.

When is it finished?
This is possibly the hardest question for me at the moment. Technically, you can do this forever with the same source audio. But there must be a limit, there must be an end. Do I leave it up to chance? Or do I choose? I decided that I would choose several tracks that I thought were dynamic and unique, then stop the composition process.

I remember going to an exhibition of woodcut prints where they showed the final print and the woodblock that made it. After making the finished print, the artist gouged a deep ugly ‘X’ across the wood block to prevent any more prints. I always thought this was a difficult but necessary decision a woodcut artist could make, especially after so much time had been spent carving it.

To make these compositions truly unique, they must be unique. After the composition process is finished the tapes will be erased and reused for the next 'Generation'.

The Title
The title ‘Generations’ was an appropriate title because the word has two meanings that I felt that relate to this project.

The first meaning is: "The action or creation of something". This could be used to describe the composition or the sound that is made as a result of the composition process.

The other definition is: "A type or class of objects usually developed from an earlier type." This describes the process of the layering that happens during the recording and rerecording of the composition.

As I said in a previous post, these past 4 years have been a long road of wonderful failures but recently things have been looking promising. Mostly because of the wonderful people I have recently met. One of these people is Nelson Hiu who contributed his time and talent to be a part of this project and is the artist of the first ‘Generations’ release. A future post about the production of this album will be released soon.